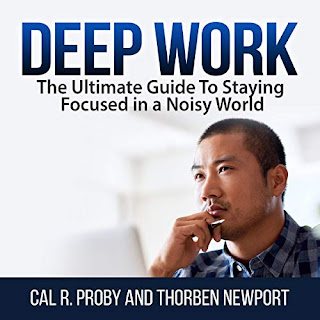 In Cal Newport's Deep Work*, we read about the importance of protecting the time we spend in focused work, allowing creative accomplishment otherwise impossible. The Hidden Brain podcast introduced me to his work.

This book has inspired and supported me in my goals of completing fiction and nonfiction.

Right now, the principles are immensely helpful as I write thirty poems in thirty days for the poetry marathon that is the 30/30 Project, raising funds for Tupelo Press.

Technology entices, especially during the pandemic. Without social media connections and the little zings of conversation, life can feel like a batch of chocolate chip cookie dough in which someone left out the sugar, as well as the chocolate chips.

What I'm saying, what we don't hear enough, is that foregoing the thrill of online connections is hard.

And so I try to create tech-free times: an hour or two in the morning, and on Sundays, a phone-free Sabbath. The morning feels especially powerful: it happens every single day. After I'm awake, I have a smooth, fresh, inviting playfield like the sandy beach I get to walk near my Oregon Coast home. It is a beautiful thing to make footprints in newly-minted, barren sand.

Is your morning protected, nurturing? Or is it trafficked every which way with all sizes and shapes of passersby?

From time to time (yesterday, Day One of the marathon) I notice that I am not getting anything accomplished in the day, basically. An honest assessment means usually admitting that my social media addiction is playing a role. As one of my favorite Wildfire Writers, Jessica Slatten says, "It's faux work. It makes you look busy, but you're not really accomplishing anything."

It helps me to review Deep Work, or Nicholas Carr's The Shallows, or to listen to other sage reminders of what technology is doing to my brain. I am not going off grid anytime soon, though. I must balance my Party Girl with my Monk, my social butterfly-ing with my silent, aloof ascetic.

I can't ignore the struggle. I can't go numb to it, or enter a sweet denial in which I blissfully hum along, texting, posting, giggling, meeting interruption a hundred times a day and pretending I don't really care whether or not I complete my writing projects.

I invite you to think critically about the role technology is playing in your life, and in your time. What could you accomplish if you didn't have to constantly tend to it, like a puppy in your lap at all hours of the day? I challenge you to challenge yourself, and set some limits, and find out how you can change your brain to one that pays deep attention to your most powerful goals. 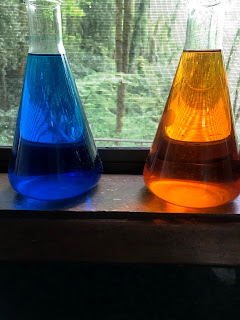 For twenty years, I've been pressing writing students, "Use the five senses!"

It's a simple formula that transforms your writing. Scenes, stories, poems–they all come alive when you invite us to breathe, smell, taste with you. Senses on every page are a brilliant way to vivify fiction and nonfiction alike.

But now I'm behind the times. Scientists have uncovered far more than five senses in the human repertoire. Your sense of balance, for instance. Write about a dizzying feeling! It can belong to you, or to one of your characters on the page. The fancy word is equilibrioception.

Another sense, which can make any story compelling, is that of hunger. How would you describe the gnawing, yawning, empty, or growling feeling of a belly asking for food?

A third sense is thermoception, which is the ability to detect heat. What is the sensation of trudging through a desert landscape, or simmering alongside a summertime pool? By the same token, we can feel cold within our bodies, from our chest to our toes, to the tips of our ears; or we can sense a chill that comes from the outside.

Another interesting sense is proprioception. This is feeling where you are in space, and includes the giddy feeling standing on a twentieth floor balcony, or the precariousness of walking a tightrope.

Wake up to your senses - they are legion, and they fill each human moment with possibility! For more, check out Wisegeek.