I felt vaguely uncomfortable with the egg. I'd drawn it off the cuff. I stood back and looked at it, the broken edges in neat triangles. Eggs don't crack that way. The drawing bothered me because it was a lie.

It's the kind of lie that shows up in creative work when a person is hurried or distrusting of their own efforts.

In a story, I may want to write how his eyes were full of light and held smiles in them. "But that's corny," I may tell myself. I'll write, instead, "His eyes twinkled." It's not true. It's something that has been said before. And it's much less scary than attempting a word picture that may fail.

For example, my egg here. 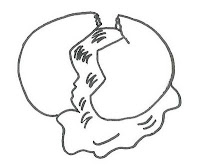 I had to crack an actual egg and look at it. It was difficult. My drawing doesn't come close to reality. It's not nearly as "cute" as the first whitely yellow happy egg with the ruffly edges. But it's closer to true, which is always a beautiful, satisfying thing to attempt.

Find a line in your work which is disingenuine, too easy, not quite true. Rewrite it, telling the truth of what you see.