"It requires a lot of squash."

So said one teenage girl to another on their way to the women's restroom. I was in line during intermission at a theatre show, and I jotted down the comment and wondered about it. What was it that required such squash? A Dumb Donald* costume? A butternut facial cosmetic treatment? A wrestling ring for squash wrestling?

Sure, it may have been something simple, like soup, but I'm glad I didn't know that. My imagination had more fun this way.

Listen to snatches of a conversation. Write down a line of dialogue. Ask yourself questions - it's a great way to unsquash your writing. 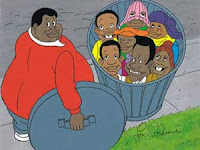 As a kid I watched the Cosby Kids every Saturday morning. Until today, I thought that thing on Dumb Donald's head was a squash. (It's supposed to be a stocking cap.) Sort of a visual mondegreen.

Email ThisBlogThis!Share to TwitterShare to FacebookShare to Pinterest
Labels: Curiosities and Delights