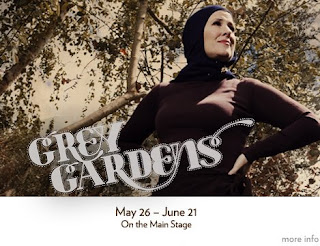 I love a good musical. I also love to be surprised. And so I doubly loved Portland Center Stage's production of Grey Gardens, not like any musical I've ever seen. It was rich with irony and confusion, darkly funny, and sad. It was so much fun I felt guilty about it, as if I shouldn't be enjoying the florid jokes and songs that point to the pathetic squallor of Big Edie and Little Edie, characters based on real people.

The general public is fascinated by the rich and famous, so when the rich and famous turn out to have weird uncles - or, in this case, a weird aunt and cousin belonging to Jackie Kennedy - we're agog, rubberneckers at the scene of an accident. I think it's part of why we can't resist the Grey Gardens documentary this musical was based upon. We see in both the show and documentary how the mother and daughter disdain each other and yet can't live without each other. Besides their unhealthy dependence, their home is unhealthy in more physical ways. A decrepit mansion, it is furnished with broken objects and debris, and populated by multitudes of cats and fleas.

The first act shows them as they once were: Big Edie (Rebecca Eichenberger in Act I) was the life of the party - or at least she threw the party. Many of them. The Beale family was at the top of the social scene in lovely East Hampton, New York, but Big Edie was so self-absorbed, she had little regard for her daughter's feelings and "helped" by turning away suitors - among them Joe Kennedy (played by Ryan Jesse). Little Edie (Janine Divita) is confused and lost, trying to emerge from her mother's shadow, longing to escape the doom she senses ahead of her. Their tensions are exquisitely portrayed in song and situation.

The second act takes place some thirty years later - the house has gone to ruin, choked with weeds, lacking plumbing, filthy. A homeless teenager, Jerry, is their only friend. He comes around for the meals. Played by Ryan Jesse, this kid was hilariously earnest and half-dead at the same time - the sort of combination that made this show such a wonderful concoction, a mix of opposites. We feel sorry for everyone, but we're not sure who we feel sorry for the most. Big Edie is truly amazing in this act. There's a devil-may-careness to this bedridden old woman who loves to show some cleavage, yell for her daughter, play the old phonograph records of her own vocal performances, and sing along. Whatever her life has turned out to be, she sings with gusto that she "had her cake" in life, and she'll take the fleas and the Board of Health complaints right along with it.

There's an insane joy when Big Edie (Dale Soules) sings, "But Jerry loves my corn!" She beams enormously and hands Jerry the cob. Despite everything, she can still (mysteriously, by her bedside) boil corn on the cob, which she serves with all the pride of the hostess she once was. What a fine portrayal of the need to be needed. How, in a dire situation, a person can always find a giddy pleasure in helping someone who is worse off.

Little Edie (Rebecca Eichenberger) is also terrific in this act. So tart and apathetic, lazy and careless and resigned, yet smart and gifted, too. She's the chief soup-can opener, caring for her "helpless" mother. "She ain't much of a housekeeper," says Big Edie. Yet beneath all that confusing dependency, there is genuine love for her mother, but she can never quite sort it out. All her life, she's never had a chance to seek her own dreams. It's compelling when she sings about the sadness of "winter in a summer town."

Big Edie loves to listen to the radio, which brings about my favorite scene. Norman Vincent Peale (Evan Thompson) descends the staircase into Big Edie's room, lit by a beam of light, leading an angelic, white-garbed choir, singing beautifically, "Choose to be Happy!" It's so knee-slappingly funny, simplistic, joyful, and strange - especially with the piles and piles of tin cans heaped around Big Edie's bed, the horrible garbage and decay. I loved it!

All this brings us to my point for the moment. Living creatively demands living with paradox. As writers and artists, we need to cultivate opposites, to embrace ambivalence and let things stand together that don't always stand together. Musicals and documentaries. Euphoria and devastation. Love and hate. After all, isn't that the way life is?

Where in your work are you embracing paradox?