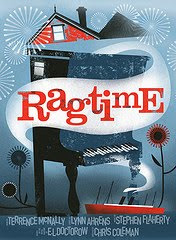 Portland Center Stage’s new show opened Friday: Ragtime, a musical based on the novel by E.L. Doctorow. What an opening! This show fulfilled my musical cravings and mesmerized me with its characters.

First we see the well-to-do home where Mother, Father, their little boy and his uncle (Susannah Mars, Robert Mammana, Alex Thede and Danny Rothman, respectively) are enjoying the wealth and privileges of the booming early 1900’s. Next we are dazzled by Coalhouse Walker Jr. (Gavin Gregory), playing piano, singing and dancing, in a Negro speakeasy. He sings of his lost love in a voice smooth and dark as maple syrup, and just as sweet. In a new scene we discover that Coalhouse’s lost love is Sarah, a washerwoman for that well-to-do family. Distraught by a pregnancy she has never revealed, she struggles with abandonment and fear. When Coalhouse finds his love, she refuses to see him, but Mother invites him within to play the piano. 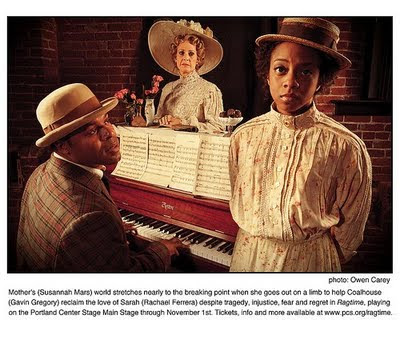 His new rhythms bewitch everyone in the house, especially the lovelorn and confused Younger Brother. Coalhouse comes to play and sing, week after week – for five months. I found myself smiling with wet eyes in the beautiful moment when Sarah slowly emerged from her attic hideaway and accepted his outstretched hand. All this only halfway through the first act!

Ragtime is a story of achievements and stumblings, on a road as rough as the first highways of this country. Those were the days of new prosperity and uncharted freedom, when immigrants struggled alone in filthy tenements, and Model T Fords were marvels worth envying. It is a Model T Ford that is Coalhouse’s undoing, and the undoing of the complacent, rich white family. One can only imagine such upheaval that must’ve taken place in countless cities across this land, as prejudice, affluence, injustice and poverty collided. Then again, perhaps that is still the essence of our problems today. Only the music has changed.