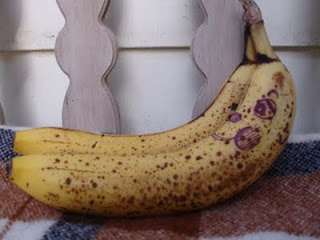 For years I've let bananas ripen on my kitchen counter. First they get happily freckled, like the ones above, then soon darken and shrivel to black-black, containing within them the sweetest mush.

Brown bananas were no longer an opportunity. They were a should. They no longer represented something I could do, and might want to do, and would be fun to do. They were something to feel bad about.

Blogs can do the same thing to you. Begun as opportunities, they become burdens. Or houseplants. I do not have a green thumb but I dearly love living things, and often I'll have some frail green thing struggling to survive on my kitchen windowsill. "I should keep that plant. I should try to save it."

I'm learning to throw away the shoulds in my life. The "someday, if I have time" things that make me feel bad because I don't have time. Of course I really do have time, but I choose to use it for things other than making banana bread. Which is fine. Which is good. Something has gotta give - in my case, brown bananas.

So I'm throwing them away.* Good-bye! Off the counter, off my list of things I should be doing. As a writer, I've got to make time to write, and some things simply must go. Shorten the should list, for heavens sake. Make choices about what's important - and don't budge.

*(Funny, but as I commented on Facebook that I was throwing away brown bananas, there was a veritable outcry! No, no! Make this! Bake that! I had to laugh.)

What are the brown bananas in your life?

Email ThisBlogThis!Share to TwitterShare to FacebookShare to Pinterest
Labels: Amazements