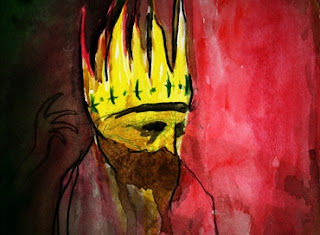 Ah, that moment. Settling into a good book, feeling the pull of words as you recognize you’re in the hands of a gifted author. There’s nothing like it. The same hush falls over your soul in an art museum. Or observing a skilled dance. You lose the need to critique and judge, and you get lost in the story of what is being created.

Shakespeare’s Amazing Cymbeline, presented by Portland Center Stage, wove that magic for me. I felt like I had gone back into time and stumbled upon a traveling theatre troupe in some lush corner of a dark wood. Each actor was a veritable genius, taking on numerous roles with grace and fun and surprise.

The best part about being entertained by experts is there are no distractions. You’re not put off by the mechanics – clumsy wording, sloppy staging, forgotten details such as a shoddy art frame or costume colors that don’t match. With Cymbeline, I could enjoy the entire show in “magic” mode without noticing the seamless details.

I’m not sure how, even after taking a Shakespeare class, I remained unaware of the fact  that Shakespeare didn’t write just tragedies and comedies and histories. Modern critics have classified Cymbeline among his romances. These plays have elements of comedy, but are more complex, with enchantments and scenes of both countryside and court.

No wonder I felt tucked away in a forest along with our heroine, Imogen, when she fled the castle of King Cymbeline, her father. A faithful servant, Pisanio, had revealed to her an evil plot, wrought heavily in trickery and rooted direly in jealousy and lo! Disloyal fortune! O vexation! Fie! (Okay, I’ll never get to the facts this way. You can read the synopsis here.)

Kelley Curran, in her role of Imogen, was a marvel. I loved the way she interpreted her lines, to me the most important job of a Shakespearean actor. She succeeded in making the archaic language real and human to me, a child of another age. Curran shared a gift of illuminating emotion. I especially loved the bits she infused with joy – phrases that burst with laughter. “Mine is beyond . . beyond . . .” she laughed, speaking of the love she felt for the husband she dreamed of, so far away.

Michael G. Keck took on a pleasing role in this adaptation by Artistic Director Chris Coleman. The piano player narrates the tale, underscoring events and helping to streamline the enormous scope of this story. Coleman imbued him with wisdom and commentary that directed our observations. “If you’re writing this at the end of your career . . . a detour makes sense,” the piano player mused, gazing over the audience. He alluded to Shakespeare’s own broken heart, and relationships beyond repair. Then we, the audience, understood there was more to this play than even Shakespeare intended.

Another favorite character was the sleazy Cloten, Imogen’s would-be wooer. I loved how Ryan McCarthy gave him real slink, while making him pathetic yet terribly dangerous. I have to admit to doing several double-takes at the costume changes, and wondering how-the-heck those wigs looked so real. With guilty pleasure, I experienced the play for the very first time, naïve about what I was in for with a Shakespeare romance, hoping it wasn’t going to break my heart.

I relished the sensory suggestions of old Wales and ancient Britain, with the rich, rolling accents (aided by dialect coach Mary McDonald-Lewis) and homespun fabrics (designed by Jeff Cone), a treat for someone like me who loves all things Celtic.

And I appreciated the sweet way that excelling in one’s craft brings others into your story world – whether you’re a bard, a novelist, or a pizza-baker. First let us hone our skills, then let us welcome others into our heart.