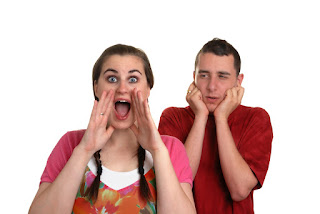 Everything you put out there online is saved for posterity somewhere, and the Library of Congress will know about it forever and ever, amen.

This article was not for me.

I do a good job of second-guessing myself aready. I ask, Do I really want to post about that? Will anybody care? What if I make a mistake? What if I offend someone? What if I look silly?

Thank goodness for the person who got me tweeting. Workshop teacher JoJo Jensen said, "Don't take it too seriously. Don't worry about making a mistake. After all, it's just Twitter."

I was so nervous about overtweeting, undertweeting, tweeting stupidly. It's the same fear I have about publishing some of my work. Exposure is scary. It makes me feel vulnerable and fallible.

Making tweets, I learned to say to myself, "It's just Twitter."

Here's my point: we all know people who don't filter themselves. These are the people who need to take warning. That's who the article was meant for. Not us, the timid and self-censored.

It's like this. My super-conscientious daughter sat quietly in first grade, working hard to obey every rule. When the teacher told the class to stop visiting the restroom so much, she took it very, very seriously. When I picked her up from school, she was in excruciating discomfort, having not used the restroom all day. Ominously, she recounted the teacher's words.

Many of the writers I work with (and mostly me) are sensitive people who have been thrown in with the banging, clanging tweeting social mediaists*, and when they whisper or get up the courage to tweet, they are already terrified of being shot down. Listen, you gentle and brilliant people. You have something worthwile to say.

Don't be so careful. Break the rules of careful. The voice of "Be Careful," was not meant for you.

How can you throw off your caution today, and write, blog, or post boldly?

*Is that a word? Did I make it up? Good. Here's another way you should be bold: make up words.