Horror on the Menu: Sweeney Todd at Portland Center Stage 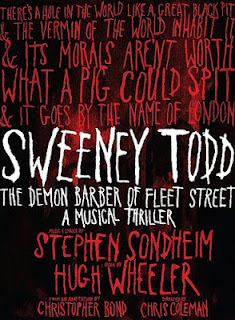 What's the point of horror? Well, for one thing, it allows you to see the world differently. You sit up and shudder, as if waking from a nightmare, taking stock of what is real and unreal. The Portland Center Stage incarnation of Sweeney Todd gives us horror in tasty, devilish measure.

Directed by Chris Coleman, the play opens with the despairing wail of sirens as homeless people shuffle about in their rags. A chorus puts us on edge, warning us about the Demon Barber of Fleet Street. It doesn’t seem likely that he will be anything but repellent.

Yet Aloysius Gigl’s portrayal of Sweeney Todd captures our sympathy. Returning to London after wrongful exile, he sings his heartbreak over the woman he loved. “And she was beautiful,” he tells us, in his richly textured bass-baritone. We agonize to hear how Judge Turbin abused his power to destroy what Sweeney treasured.

This distracted, disconnected character is subtly crafted, as Sweeney Todd ignores everything but his own pain. Bit by bit, his need for revenge devours his soul and sanity.

Matthew Alan Smith is a wonderfully disgusting Judge Turbin. The lecherous Judge has taken Sweeney Todd’s daughter into his possession and now plans to marry her. As for Johanna, she is a lovely soprano, endearingly ditsy, played by Rita Markova. The tension is thick as we count down the minutes until she can escape, or Sweeney can cut the Judge’s throat. 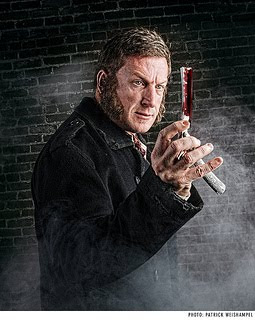 Because, yes, we start to root for throat-cutting. Discriminately, at least. The audience gasps, but also applauds, when blood spatters the clean, white, barber’s apron and Sweeney Todd dispatches Londoners, starting with a quack remedy salesman. The barbershop death chute is great fun to watch, and there is a sigh of relief when Sweeney spares an unsuspecting family man with wife and baby in tow. We see how precarious life is, and what a dreadful thing it is to stop believing in humanity.

At some level, we know we should be appalled by Sweeney, and that’s what makes things so interesting. We, too, feel we might sharpen our blades at such injustice. Sweeney Todd is a sort of demented Robin Hood of the Industrial Revolution, resonating with the commoner who finds himself powerless against corrupt lawmakers.

Lighting designer Diane Ferry Williams and her expert crew bring out the ghoulish shadows in the faces of the ensemble. The voices are clear and strong, as the dissonant music unsettles us and Stephen Sondheim’s lyrics work their magic.

“The history of the world, my pet, is to learn forgiveness and try to forget,” sings Sweeney to his accomplice, the raucous Mrs. Lovett (Gretchen Rumbaugh).

But forgiveness is not his forte.

He refines his philosophy thusly: “The history of the world, my sweet, is who gets eaten and who gets to eat!” 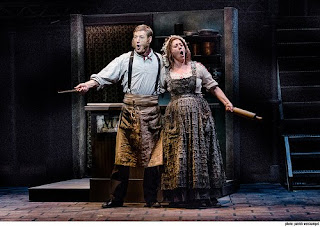 Because when you’ve lost everything as Sweeney Todd has, you may yet keep a sense of humor. The song, “A Little Priest,” has the audience in stitches as Sweeney Todd and Mrs. Lovett expound on the various pie flavors and textures ascribed to butler, grocer, locksmith, clerk or priest. Utterly delightful.

The kind, naïve souls seem to be the only ones who still believe in the world. Anthony (Louis Hobson), the sailor who strives to rescue Johanna, marvels at the world’s wonders, clueless that his friend Sweeney is a murderer. Kitchen boy Toby (Eric Little) stands by Mrs. Lovett, ignorant that she is baking pies from dead bodies ejected from the barber chair upstairs. In their tender, haunting duet, Toby points out that while he may not be smart, “being clever ain’t like being true.”

Faith and loyalty run thinner than beggar’s blood. The authorities have a skewed view of morality that sickens Sweeney Todd. “We all deserve to die,” he says. Is this the reality? We wake from the nightmare, shaky, mesmerized, and facing our own choices about how to live.