These were the words audience members used to describe Clybourne Park, a play which extends the story of A Raisin in the Sun to show us Lena Younger's new neighborhood. At Raisin's conclusion, Lena and her family discover with trepidation they will be the first black family in an all-white neighborhood. 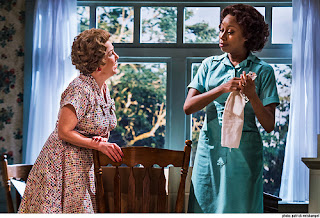 Clybourne Park opens with an inside look at the house Lena will move into. The current residents, Russ and Bev, have lost their only son to suicide and hope that selling this place of sad memories  will help them start over.

Bev is ditzy and clueless, thrusting a chafing dish upon her black maid in a useless show of gratitude to say goodbye.

Sharonlee Mclean creates a fabulously layered character in Bev, a wife and mom with all the fifties trappings of Leave It to Beaver. Somehow--I have no idea how she does it--Mclean gives us a character who is at once predictable yet rounded, sensitive, human and oh, so funny.

She is trying desperately to navigate her husband's depression, neighborhood tensions, her own grief, and her longings for a more humane world. And she keeps trying to give away that chafing dish.

The entire first act is peppered with hilarious moments, even as we become aware of the potential disasters awaiting the house's new residents.

I was completely in love with the first act, and with Mclean's performance as well as that of Sal Viscuso as Russ, the apathetic-angry father trying to make sense of the world. Kelley Curran's performance as Betsy, a deaf family friend, is an added delight, respectful and authentic.

The second act races fifty years into the future. Suddenly you get the eerie feeling that you could be one of the people in this meeting of neighborhood planners, realtor, and home buyers. All are trying to avoid the obvious: the fact of blacks and whites, still separate from each other, still battling issues of living in a community side by side.

A monied white couple is moving into the now black neighborhood, the home that Lena Younger strove and succeeded to make all those years ago. Brianna Horne, as Lena's niece and namesake, gives a brilliant performance as a poised, noncommittal young woman who keeps her sarcasm and anger at a low simmer. When she is challenged, though, that anger scalds. 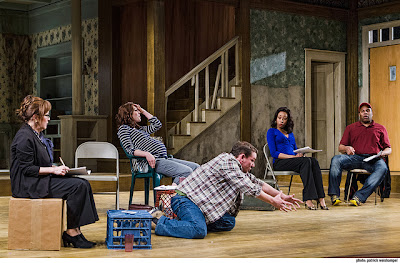 It's a fascinating "elephant-in-the-room" experience, and as you would expect, there are fewer guffaws in the second act, and more nervous titters. Yet the humor and intelligence breaks through to a deeper level.

It's a brilliant script, well-played, and the back story of the suicidal son is breathtaking.

Afterward, we, the mostly-white audience in a mostly-white city, are still ringing with self-revelation. As an audience member said after the show, "In almost every heart, there is reservation and prejudice."