The Dance of Change: Fiddler on the Roof at Portland Center Stage 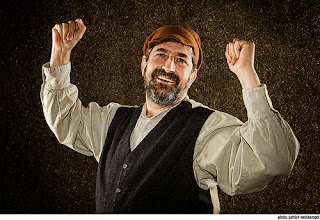 The Portland Center Stage production of Fiddler on the Roof has me thinking about change.

You probably know the story, more or less. A Jewish community in the early 1900s comes under pressure from the Russian government. Their first instinct is to overlook this pressure while dealing with their day-to-day tasks: pulling the milk wagon, shoeing the kids. But there comes a day when they have hardly any choices left at all.

There is no escape from change, when it comes down to it. Our kids grow up, and we have to change the way we relate to them, or don’t relate to them. Life forces change upon us, slamming us with fear. Life washes us with sadness as we say goodbye to another Sunrise, Sunset.
We hate the discomfort of it all. So what do we mostly do? Like the people in Fiddler, we ignore the threat of change, postponing the inevitable. 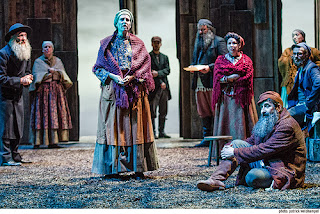 Fear mingles with steadfastness; love of tradition mixes with the terror of letting go. PCS brings these bittersweet contradictions to the stage. Fiddler on the Roof bursts with life, song, and joy, while confronting us with loss and devastation.

This well-acted production kept driving home for me what change is all about. As an artist and writer with a freshly-emptied nest, I can freak out about the changes in my life – or delight in them.

In our creativity, too, it’s easy to get comfortable where we are, denying the change that whispers to us, taunts us, suggests, “It’s time for something new . . .”  We can cling to old ways, our own personal Tradition! that served in the past.  Or we can open ourselves to the future.

And so I have come to appreciate the people who challenge and coax change, who present ideas and nudge me just a little.

The character of Perchik, fabulously played by Zachary Prince, illuminates this role. The young tutor is invited into Tevye’s home. Ever so gradually, Perchik introduces new ways of thinking to a family and community that hasn’t changed views in centuries.

It starts with gentle possibility – a dance step on a dirt floor. And it opens to more of what can be. Yes, men and women may dance together. Girls can be educated alongside their brothers. People can raise their voices to the authorities.

The first thing is to acknowledge that such changes are possible. Yet there’s always that gut cry in response: “Radical!”

These are all things I’ve been working on in the past week. How has it happened? The Perchiks in my life have invited, suggested, nudged.  My fellow creatives, through vision and conversation, have inspired me to get moving.

So I have a choice. I can ignore change, let it reign in terror, or come to terms with the fact that it is going to happen anyway. I can hobble along pulling my milk wagon.

Or I can start dancing. 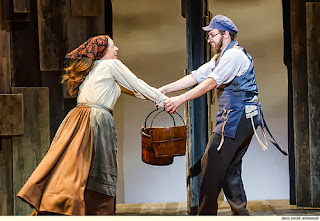