Forbidden Words, or, How I Kept Sane in Silence


A week ago, I emerged from a 12-day silent retreat. No, not a retreat. It was not relaxing, restful, or a getaway. It was a death march into deep silence, and I don't recommend it. Not unless you are a glutton for excruciating experiences which just might change you forever. 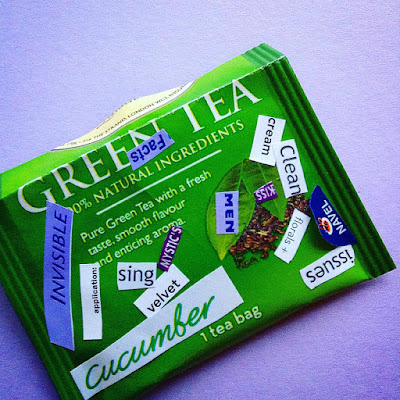 Giving up speaking was tough, but not as tough as giving up the written word. There was no reading, no writing, no journaling, for 11 days.

Three weeks earlier, I was navigating emotional upheaval during an intense yoga teacher training. My number one support had been my notebook. Two notebooks, in fact.

Now, I would have no access to my words, no way to process on paper what was going on.

She found that when she didn't have a notebook it was hard for her to think. The thoughts came slowly, as though they had to squeeze through a tiny door to get to her, whereas when she wrote, they flowed out faster than she could put them down. She sat very stupidly with a blank mind until finally "I feel different" came slowly into her head. --from Harriet the Spy, by Louise Fitzhugh


I figured it would kill me.

Later I realized that was the point.

It is in dying that we find renewal, that we truly connect to the creative force. When a part of ourselves is buried, even for a little while, seedlings of understanding take root. When we who do word-work set those words aside, surprises happen.

One thought that poked above the soil was this: that I will always create, that it is more than a thing I do, it is nature, my work: to birth that innate creativity in self and others. Well, okay, I knew that. But now I knew it anew. I mean, I really knew it.

And as I slouched around the compound (I began thinking of the meditation center as prison), I began awakening to creativity.

The bananas, apples, and oranges that were served whole, exactly the same way, for two meals a day, took on new possibility.

And it came to me how, without breaking the rules, I could treasure words.

I created a swag for my dorm room door. Well, there wasn't a place to put it, so I set the berries and branches on the fire alarm box and tucked the ends of twigs into the top ledge (thinking, wouldn't it be funny if I set off the fire alarm in this silence? But no, it wouldn't have been funny).

I built a cairn of small stones which I placed under the bathroom mirror.

I started mixing up the bananas, apples, and orange (zest!), with the proffered almond milk and tahini, in new smoothie concoctions every day.

And I collected the tags of teabags. And pulled out my pocketknife scissors, and began snipping labels from toiletry bottles and tags from sweaters. 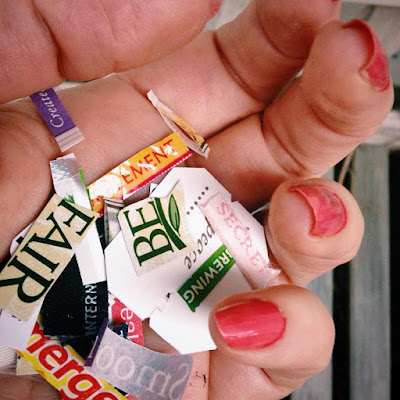 I set rules, such as, I didn't form sentences, only worked during free time, didn't write anything down, and didn't go out of my way to get a label. I placed all the tiny words in a teabag envelope: my forbidden journal. 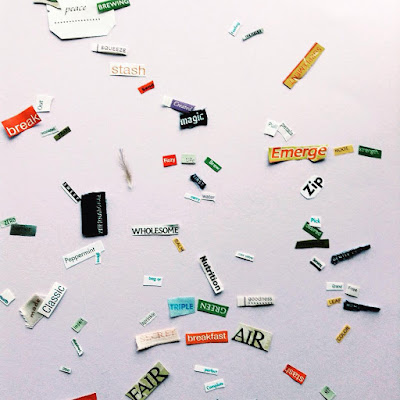 After I got home, I created with those scalloped words. And this poem emerged.

And so I ask you.

What, in your life, is asking to go underground for a while?

What elements need to die so that creativity can be rebirthed?

Where can you let go of words?

What happens when you give up the thing you think you can never give up?

When was the last time you connected to your interior creative nature?

Spark: Cut out words where you would least expect beautiful words to exist - a cereal box, a  newspaper from a birdcage. Challenge yourself to discover beauty.

Spark #2: Don't speak, write, listen to media, or read for an entire day, up to 48 hours. Pay close attention to your relationship with language. Before you resume speaking, write down your insights.