Do Hard Things: Hold These Truths

No clear impressions, either from above or without, can be received by a mind turbid with excitement and agitated by a crowd of distractions. [S]tillness (is) needed for the clear shining of light within . . . .

The play, "Hold These Truths," at Portland Center Stage, found me in a state of distraction. 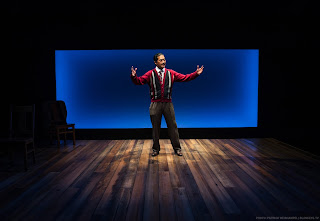 I took my seat grateful for the company of the friend who had joined me. Deep down, though, I was nursing disappointment because of the friend who had cancelled at the last minute. I was prickling with shame about the ambivalent way I was handling an important, long-time relationship. I was worried about my car in the shop. And on top of everything, I was coming down with a cold, dammit.

What I didn't want was to confront these feelings. I found a blanket of Numb, and pulled it over my heart.

Even so, there was a welcoming vibe in Portland Center Stage's downstairs theater, the Ellen Bye Studio. Ryun Yu took the stage with a wonderful, engaging presence, and soon I was caught up in the true story of Gordon Hirabayashi.

Yu starts by bringing Gordon's parents to life for us. Japan-born, they have learned to get by in a world of discrimination. There's his down-to-earth father, saying, "The nail that sticks out is the one that gets hit." There's his fussy mother, urging him down a Seattle street after a man yells, "Get out of my country, you f--ing Japs."

We watch Gordon's transformation from a meek, rule-following boy, into a University of Washington student grappling with government orders to shove him and his family off to a concentration camp, which is indeed what these prisons were called. He reads and re-reads the Constitution's promise of "life, liberty, and property."

Ryun's got a cold, I realized. He didn't skip a beat, but made this a graceful part of his performance, even as he had to wipe his nose on his sleeve. It was fitting.

Gordon takes up a political battle which is all about that nail getting hit, again, and again. He is misunderstood, even by his family. He is imprisoned and alone.

It breaks your heart, especially when you know that his efforts as a single person wouldn't change the course of history. More than 120,000 Japanese Americans - U.S. citizens as well as foreign born - were kept behind barbed wire in compounds for the duration of World War II.

Meanwhile, all the ads of that era show rosy-cheeked, white Americans sitting around their tables with their flowered centerpieces, happily making sacrifices for the war effort: giving up butter or sugar.

I think about my own childhood as a white kid in Seattle, and my shock when I moved to a neighborhood where all the other kids were white, too, and my complete ignorance of this historical event until decades later. Nobody talked about what we did to the Japanese.

Give us our blanket of Numb.

The show is peppered with audio bits, including evacuation orders. It was surreal to hear the names of familiar childhood streets and locations: Yessler Way . . . King County . . . Bainbridge Island . . . Puyallup. Within these boundaries, lives and livelihoods were stolen as longstanding community members became outsiders. Homes were ransacked and repossessed. I grew up knowing those places, but I never knew of this horror.

It made me think about Hard Things.

What power there is when a human being can give up comforts, care, and approval because of who he is, because of his own, unwavering belief in what is right.

How weak I am in light of that. 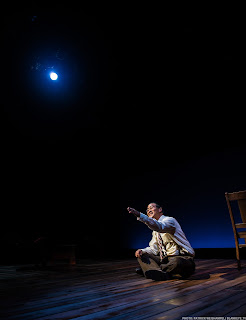 The play underscores Gordon's Quaker beliefs, and how they centered him during this turmoil. "Before we soar to a great height, we often plumb great depths," Gordon tells us.

I don't even want to face my feelings. Yet here was someone who was locked away, abused, discriminated against, who felt cold and hunger and darkness and disapproval and . . . who chose this battle.

Plus he probably had a cold.

Seth Godin talks about laziness versus emotional labor. Being too lazy to feel doesn't expand me as a human, and ultimately, it doesn't make me happy.

A meaningful life isn't about getting what I want. I have no control of the outcome of so many things, including the behavior of others, individuals or whole nations. What I can do, what I might do, is learn to be a little less numb.

Maybe I can be uncomfortable.

Maybe I can turn off my computer, my distractions, my noise, and find the stillness within myself, sitting with hard decisions and frustrations. 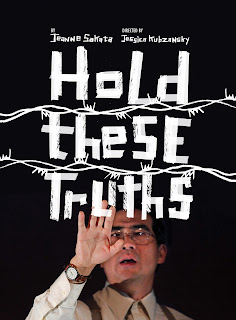