As a fan of all things Portland Center Stage, I loved hearing "Kodachrome" had its beginnings in 2015 at JAW, an annual festival of staged readings where unknown playwrights have a chance to show their work - to move, perhaps from dabbling to official.

"If the casual is made official, would it stop the rest of us from dabbling?" That's the question asked by Suzanne (Lena Kaminsky), who photographs everyone in her small town, capturing events large and small. When the Young Man (Ryan Tresser) proposes to the Young Woman (Kelly Godell), it's a sketchy moment - we're not sure if they'll make it out alive. Suzanne photographs this drama gone comically awry. Next she introduces us to the hardware store owner, librarian, history professor, mystery novelist, florist, perfume maker, waitress, and policeman. 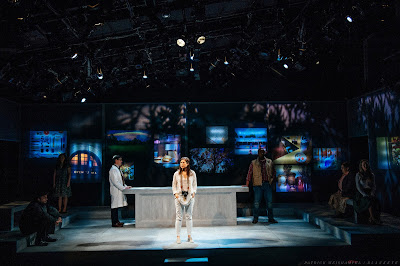 Everyone has a story, and Suzanne is amused, bemused, yet removed somehow. She recounts how the Young Woman wrestles with ambivalence over her engagement. "It gets eerily quiet as the young woman has eight separate feelings."

I love the hilarity and truth of that. How does a human being process multiple feelings all at once? How do we sort out how to love and create in this world when we want so many conflicting things?

"Sometimes I can't tell the difference between what I want, and what I think I should want," says the mystery novelist.

Dabbling - making something without too much care for the outcome - gives us a chance to discover what we truly want, a chance to experiment. When we're creating, we can inhale, get to know our relationship with the subject matter - a story or play we're writing, a flower bouquet we're arranging, or perhaps a space we're brightening with the change of a light bulb. Dabbling can help us in everything we're doing, without needing the finality of black and white. We can allow full color. We can allow the full spectrum of emotion.

In the background is my favorite character, Earl, an unassuming grave digger (Ryan Tresser) who seems rather slow - but who sees more than anyone else in town. The reason for this? He can see dead people. 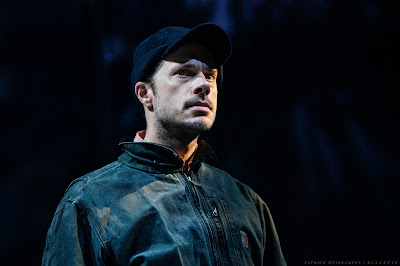 Earl and Suzanne have a chat one day, and it dawns on us why she seems so removed from her world. She's dead.

Even so, she's having a hard time letting go. With every picture she takes, she's dabbling - processing the life she's left behind. She asks questions. "Why is the goal happiness?"

As a creator, even dead, this photographer has to allow all her human emotions and experiences. She can't pretend she's ready for the next thing when she isn't.

Everything comes to a standstill, and even the quirky, adorable Earl has to face heartbreak. And then there's the moment Suzanne says, "I'm feeling five distinct feelings. One . . . two . . . three . . . ."

This allowing, this dabbling, this feeling - it can move you out of stuckness into something rare and new.

The hardware store owner says he's forgotten how to be alive.

He's given sound advice, what you might tell someone who has forgotten how to dabble: "You'll pick it back up."