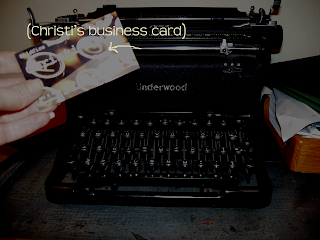 Monday's ordinary thing is typing. Not writing - just typing. Tapping the fingers, clicking the keys, until a piece of audio or handwritten work is transformed into squiggles and loops and lines which we call letters, which come clothed in fonts, which, once upon a time, were produced by a typewriter.

Typing has a mindless joy for me, but I used to hate it. In 9th grade typing class, I found setting margins nearly impossible, never did get my numbers. What atrocious stories we typed: banal plots for the purpose of letter placement, with no literary merit whatsoever. Our typing drills had their roots in the most famous typing drill of all:

"The quick brown fox jumps over the lazy dog."

I had an old storybook when I was a child, and it featured the story, "The Temperamental Typewriter," about a typewriter which decided to write fiction. The climax of the typewriter's story was when the quick brown fox jumps over the lazy dog. This was many years before I would ever type that sentence. It's a pangram, by the way, a sentence which contains all 26 letters of the alphabet.

I can't seem to locate "The Temperamental Typewriter," but I won't let that stop me from giving you an assignment. Build a story around "The quick brown fox jumps over the lazy dog," or a pangram of your own invention.