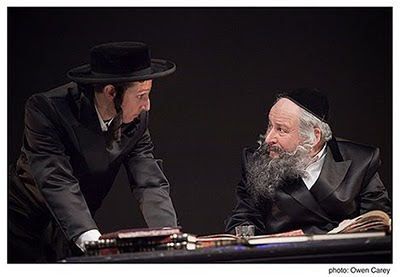 I have loved the novel for twenty-some years, so I was thrilled when I learned The Chosen would be part of this year's season at Portland Center Stage in an adaptation by Aaron Posner and Chaim Potok.

A theatrical encounter is much different than a reading experience. Theatre sounds out chords in the music, so to speak, which may have played differently in your head. Indeed, the play's the thing that can stir underlying themes and make you look at the story in new ways. A director's notes point you in a new direction; an actor's timbre enlivens a word or phrase you may not remember reading.

Always, the story's theme of silence has struck me like thunder. What seemed fresh to me this time around: the theme of tolerance. Matthew Boston, as Reuven Malter, plays the adult narrator looking back on his teen years as the best friend of a Hasidic Jew. I loved the gentle humor with which he infused his role, lightening up the spiritual subject matter. Reuven Malter opens with the Talmudic phrase: "Both these . . . and those, are the words of the living God."

The phrase gains meaning as we witness the stark contrasts between Reuven's Orthodox Jewish upbringing and that of Danny Saunders. Danny is born into the Hasidic tradition extending back generations and infused with cryptic rituals.

Can two ways of viewing and worshipping God both be true? What happens when world catastrophe divides families of faith - and Jews of different ideologies find themselves in opposition? I appreciated the way things were pared down in this version so we could absorb the meanings of Apikorsim ("Bad Jews," as Reuven puts it), or Zionism, or what it means to be Tzaddik.

Carter Hudson's young Reuven was so likeable and all-American. I enjoyed Jonathan David Martin's clear-minded and straightforward take on Danny Saunders, and I couldn't help but like Reuven's father, played by John Rothman. This father seems to me - and to most of us Western-minded folks, the ideal father. One who listens, respects, talks, shares. Spends time with his child.

Again and again, as Reuven Malter and his father discussed Danny and his family, the lesson was tolerance. Helping Reuven to understand the other. And yet David Malter's own biases showed through, too, at times. The way he acknowledged his own weaknesses endeared him to me.

We see the differences in Reuven's father and in Danny's father, who seems for all the world like the parent we would never wish for. A father who is removed, traditional, severe, unyielding. David Marguilies' tempestuous, robust portrayal of Reb Saunders was my favorite performance of the show.

The beauty of this story, in novel and done wonderfully here at PCS, is that it teaches us to look at "the other" differently. Our assumptions of Danny's father are tested, just as Danny undergoes a test in the play, subjected to treatment which appears cruel and abusive.

Has someone ever challenged your world view by simply being drastically different? Were you open to the experience? What did you learn?