Who gets to keep the faith? 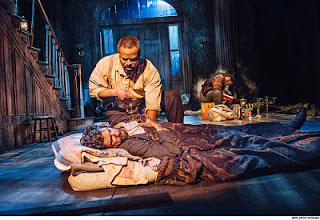 You know, after a divorce, how possessions get sorted out? The confusion centers around who gets to keep what. There's a sorting out of furniture, cars, even friends. Immediately after the Civil War, there was this kind of feeling in households of newly freed slaves.


A divorce was taking place - and rightly so. These slaves who had been forced to go along with things and put on a happy face were now free to live their own lives. Their resentments and hurts boiled to the surface.


For the DeLeon household of Virginia, the question that hung in the balance was: Who gets to keep the faith?


This confusion and bitterness is depicted beautifully in Portland Center Stage's production of The Whipping Man. Caleb, the master's son, played by Carter Hudson, crawls home from the battlefield on hands and knees after a gunshot wound to the leg, and immediately after the defeat of the Confederate army.


Caleb's family mansion is charred and in shambles, a set convincingly created by Tony Cisek. The once-loyal slave, Simon, chooses to do a good turn and try to save Caleb's life. But Simon has to remind Caleb that his actions are by choice. As Caleb mindlessly barks orders, Simon tells him he needs to stop ordering and start asking.


John, the ne'er-do-well younger slave, newly free, has little compassion to offer, and a whole lot of comic relief, as played by the animated Christopher Livingston. Livingston brought this ruffian to life and gave us a hint of the confused, tortured young man behind the careless exterior. 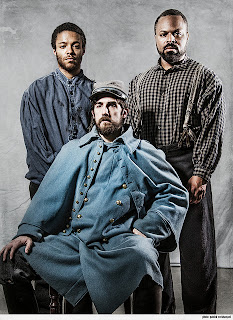 When Simon decides to lead them all in a traditional Passover Seder meal, the question remains of who truly can own this faith they all grew up with. In light of all the betrayals and bitterness, who can claim he has any faith left at all?


This is an extraordinary story, provocative and well-crafted by Matthew Lopez, who garnered a John Gassner New Play Award for the script. There are many surprises and aha! moments, and I'm loathe to give any of them away. The takeaway is a sense of understanding and sympathy for those who lived these horrors, especially men like Simon and John, whose deep losses we learn about as the play continues. And we feel compassion for Caleb, too, as his illusions are shattered along with his body.

One of Carter Hudson's fine moments is a monologue in a brief war scene.

Gavin Gregory's Simon was a blend of wisdom, loyalty, truth, and a wounded sense of justice. "It will never be like it was before," he tells the disillusioned Caleb, who just wants things to go back to the way they were.

I felt the first part of the show was weaker, when main characters faced away from the audience. But as the story continued, the many, many strengths were evident. This is a story that shines, and these artists honored all the pain and honesty and questions of this remarkable situation. As Simon tells us, you don't lose your faith by asking questions. "You lose your faith by not asking any questions at all."