The Roar of Storytelling: The Lion at Portland Center Stage 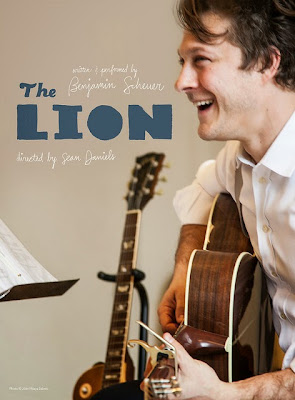 "Human beings have been gathering together to share stories as long as we've been on the planet," says Chris Coleman, Artistic Director for Portland Center Stage.

These gatherings, these stories--they are coming to mean everything to me and the work that I do.

There is no straighter route to the heart than through telling a story, especially a story in song.

The Lion makes such a journey. Benjamin Scheuer's tender, conversational folk-song stories completely disarm the listener, until before you know it, he has harpooned your heart.

We begin with our guitar-playing narrator, Ben (Benjamin Scheuer), singing about his childhood longing to play guitar like his hero, his father. The man dazzles and warms him with the gift of music.

There are signs, however, that something is not right.

"What do you do when your dad breaks your toys?" Ben asks his friend after one of the father's rages.

This mystery grabbed me from the start. I've always been hypervigilant about the signs of mental illness, given my own relationship with an unpredictable parent. It is a story that I myself told at Portland's Listen to Your Mother show last week.

These places where others may share our deepest hurts, they rivet us. They meld us together, more tightly than all of our attempts at understanding.

We follow Ben as his temperamental father continues to inflict deep wounds and then abandons him.

Ben closes himself off to the pain he feels. At the same time, he grows up to pursue a musical career. He falls in love, he falls out of love. Songs twirl and tangle around your heart with all the playfulness, trickery, and simplicity of a yoyo on a string. 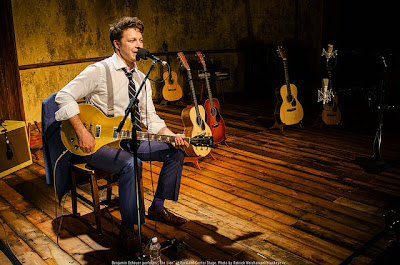 You'll hear the quirkiest, sweetest folksy love song in the world. You'll experience an intense processing of the past - a thing all writers do. When Ben reads the stories others have written about his "saint" of a father, he reels with confusion and bitterness.

The show stuns in its simplicity. My daughter, who has worked theater tech crews, marveled at the lighting. The flickering shadows brought us all close, as if we were sitting around the fire with this storyteller.

Nothing prepared me for the point where Ben faces his ultimate crisis, which threatens to isolate him forever. He finds his inner lion. He discovers a strength and a roar. 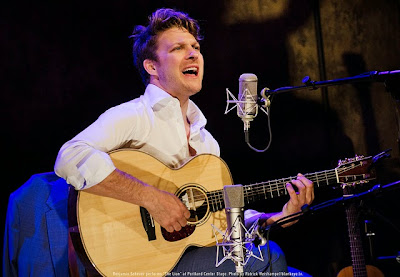 Oh, and there are freckles in invisible places, a Mr. Puddyfoot who teaches "maths," a cookie tin banjo, a haunting pain in the body's left side, questions, dreams and hope.

Unexpectedly, I was overcome by tears, several times.

This wild-hearted musical was the perfect reminder of what it is to be human, and to resonate with the gift of story.