What We Think We Know: Three Days of Rain 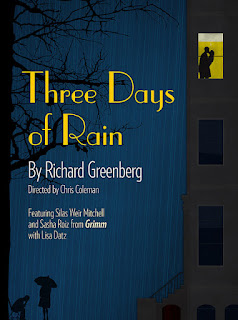 Three Days of Rain at Portland Center Stage held me rapt with the language of its characters, and all the humor and wit and yearning within that language. It was engrossing and funny and unique and provocative. But more than that, it sent me away with a key.


I’m still turning that key within my hands.
The play opens in 1995 with Walker (Silas Weir Mitchell, of Grimm fame), at loose ends in a disheveled apartment.

He is soon joined by his sister Nan (Lisa Datz), as they sort out the estate of their architect father after his death.

They look about themselves, stunned at his creations, which include this building.
They wonder about the neighborhood, and “all this old stuff covering old stuff and old stuff that’s been scraped away to reveal older stuff,” as Walker puts it so delightfully.
As they question their father’s work and life, they touch raw emotions and painful memories about this man, a legend in his career and a silent mystery to his children.
The mystery widens to include their mother, who had so little in common with their father. How did Ned and Lina ever get together in the first place?
And when their childhood friend, Pip (Sasha Roiz, also of Grimm fame), visits with his own questions and agenda, things get even more confusing. Walker, hurt and angry, can’t understand why his father named Pip prominently in his will – and slighted his own son.
Meanwhile, Nan prickles, trying to fulfill her big sister role and keep the situation under control.
Ah, but Walker makes a discovery at the old drafting table: a worn notebook filled with his father’s handwriting. “That’s why they kept this place!” he says, with hilarious solemnity. “It was the house of the journal.”
Walker scours the pages for some hint of emotion, and most of all, for a sense of the love and approval that has evaded him all of his life. Indeed, Walker is my favorite character, and I loved Silas Weir Mitchell’s expression of his captivating depths and tentative grasp on mental health.
Walker reads through the sparse entries. “‘April 3 to April 5. Three days of Rain.’” The brevity sends him into a rage. “A weather report – a fucking weather report!” 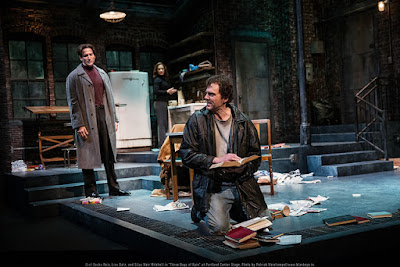 As this act closes, Walker makes a conclusion or two. And brother and sister find companionship, facing together all that they will never understand. Of course it’s funny, too. “If you throw up, it will be ceremonial,” Walker tells Nan.
It is the next act, though, that holds the secrets, the dreams, and the mysteries of the parents, Ned, Lina, and Pip’s father, Theo.  In this wonderful portal to 1960, we see what propels these figures and how little of their emotional truths have been revealed to the children.
What unfolds is a scene of tenderness, taking place over the infamous April 3 to April 5.
Afterward, Ned opens his journal. (Not a diary, as Lina suggests. “What’s the difference?” she asks. He answers,“I’m a boy!”)
Ned pens the simple lines that will one day infuriate his son: “Three Days of Rain.” He smiles. “I’ll know what that means.”
As we hear this man, inflicted with a stutter, we begin to understand his silence and his awkwardness.  We learn his motivations, and discover Walker’s misconceptions across the board. Ned reveals his dreams and passions – which hint at the difficulty he will one day have engaging with his children. We piece together a map of his soul, and see that his son’s own name and flighty ways will reflect Ned’s highest aspirations. 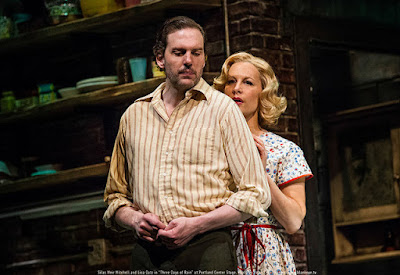 The insights are piercing. What is most clear is that assumptions create walls – blocking the love that humans could otherwise share.
I think of the assumptions I’ve made in my own life.
About friends, family, partners. Just before writing this, I wrestled with calling Aunt Lacy, whose birthday I missed by a day. Since she is the most incredible person I know at remembering birthdays, I was sure she would be disappointed and angry at my lateness. I wanted to dismiss reaching out. To ignore. To be silent.
The trouble with silence is that it fosters more assumptions for the other person.
And soon, neither of you is aware what the other truly feels.
I put down my pencil and called Aunt Lacy. She responded with warmth, appreciation, love.
We can hold onto these stories of our relationships for a lifetime. We can choose a course of action that divides, and further divides.
Or we can take a hint from Three Days of Rain and mentally peel back our “old stuff covering old stuff” and ask:
What if?
What if I don’t have the story about this person’s motives?
What if this person’s silence or brevity has nothing to do with me?
What if this person loves me more than I can imagine?
Like I said, this is a key.
I have many more locks on my heart to open, many more assumptions to explore. And it’s not 1960, or 1995, but 2015. The perfect time to begin.


Writing prompt: Think of someone who has hurt you. Now visit the above three questions, writing the "what ifs" and imagining reasons for their actions much different than your assumptions.
Photo credits: Patrick Weishampel